In ultraluxury condo buildings, it’s everything and the ice skating rink

Personal 10-by-15-foot plunge pools on each unit’s balcony. An ice-skating rink. A FlowRider wave pool for surfing. Bowling alleys. Private elevators for people, and for cars—able to whisk prized possessions and their owners in complete seclusion to their own four-car garage, inside their condo, visible through a glass wall from their living room high above the ground.

“The art of development is giving people what they don’t know they want,” said Shahab Karmely, head of KAR Properties.

Karmely’s One River Point includes a lap pool, an infinity-edge oasis pool with poolside café, cigar cellar, and “a club upstairs where you have private music recitals,” he said. Plus, “private dining or open dining, with multiple chefs you can pick from.”

The four-level penthouse at developer Gil Dezer’s Porsche Design Tower has two private swimming pools—the plunge pool on the balcony and a private, full-sized swimming pool 17 floors in the sky.

All his building’s residents can enjoy an indoor golf simulator where they can play 1,800 different courses, 24 hours a day, because, he said, “It’s been known to rain in Florida.”

If speed is more your speed, the property also offers interconnected virtual racecar simulators. “This is not a video game. This is the real thing where you sit in a chair and the chair throws you around and there’s three screens that move around with you,” said Dezer. “We have three of these hooked up together so you can race your neighbors.”

More and more of the new ultraluxury towers include motion picture theater rooms where building residents and their friends can view first-run movies in the intimate surrounds of a reserved room “at the same time or before it’s in the theater,” said Brickell Flatiron developer Ugo Columbo.

Almost all the buildings include private elevators, although the Paramount Miami Worldcenter takes it a step further by including a second one that opens into a “lock-out studio” that can be used as a guest room or mother-in-law’s quarters, and gives owners the option of riding in privacy from their residence to the third floor of the ground-level mall. “You’re going to see a lot of people shopping in their pajamas,” said developer Daniel Kodsi. 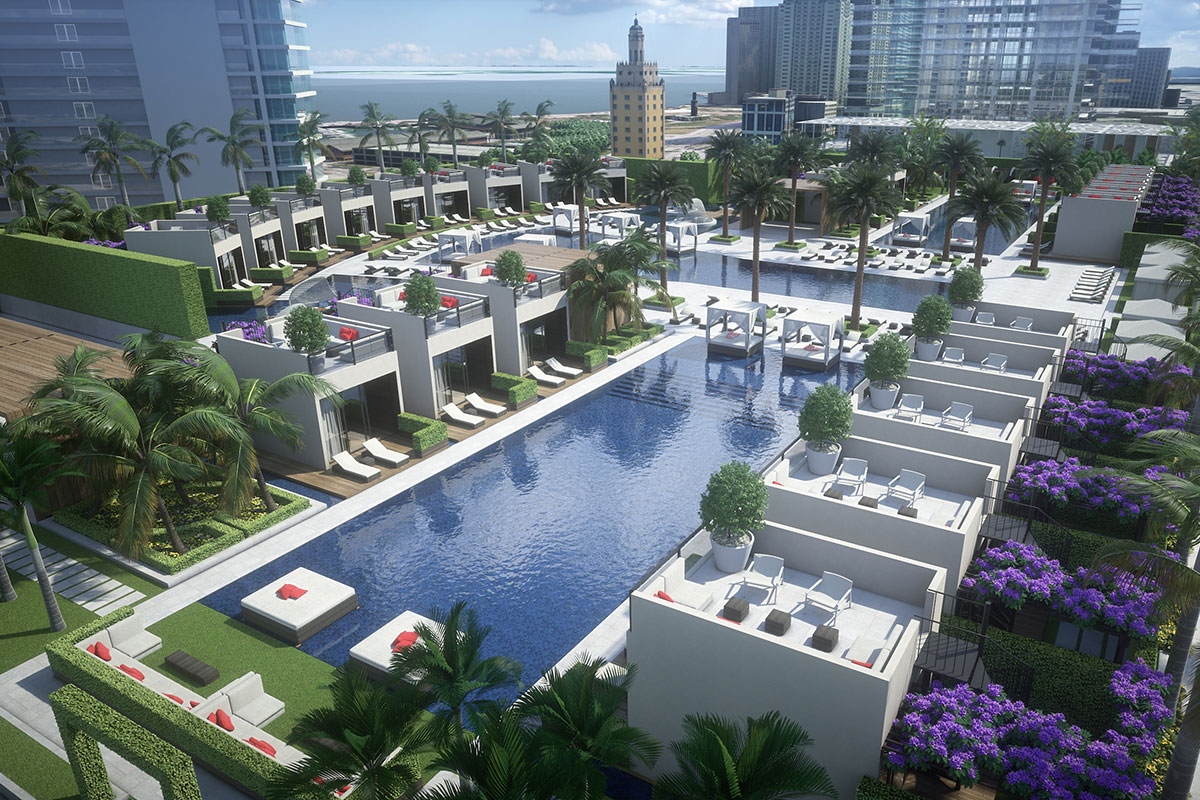 But even before the latest luxury becomes commonplace, developers push for the next, best thing.

“It’s not about the one-upmanship between us developers,” said Dezer. “It’s really just giving what the buyers are asking for.”

Still, it’s a way of seeking an advantage in an increasingly competitive market space. Developers face higher land and construction costs, along with a narrowing pool of foreign buyers—who have been responsible for much of the activity in the latest building wave. A strong dollar, making purchases more costly for out-of-country buyers denominated in other currencies, has had an effect as well, according to the Miami Downtown Development Authority’s most recent quarterly residential market study.

Anthony Graziano, senior managing director of Integra Realty Resources, which produced the report, said stabilizing prices are also having an impact on sales.

“Part of the slowdown is that the pricing has reached a point where there isn’t enough of a future upside in the mind of a foreign buyer,” he said. “Ultraluxury buyers are smart. And they look for ways to maximize their investment dollar.”

However, that’s not keeping even those developers offering more a affordable luxury experience from packing on the amenities.

Kodsi’s Worldcenter, where pre-construction prices average $700 a square foot, includes a 2-acre sports complex on the ninth floor of the 60-story tower—with an indoor regulation-size soccer pitch. That’s in addition to the tennis courts, running track, yoga deck, basketball court, and boxing studio. And, for the musically inclined, there’s a fully equipped “Jam Room” with piano, drums, guitars and, yes, a recording studio.

The Brickell Flatiron, where the penthouse prices range from $2.5 million to $14 million, includes a “digital concierge” that tracks residents via their smartphones and offers to have packages delivered, make dinner reservations at the in-house restaurant, or the like, based on their location in the building.

Developer David Martin’s Park Grove at Grand Bay sticks with humans, but adds butler service in addition to the concierge, for things inside the condo itself, whether it’s getting groceries and stocking the refrigerator, or getting something fixed when it breaks.