What Buildings Will Look Like After the Covid Crisis

What Buildings Will Look Like After the Covid Crisis

What Buildings Will Look Like After the Covid CrisisOneWorld PropertiesAugust 4, 2020September 9, 2020
Read the PDF version »

Mansion Global
What Buildings Will Look Like After the Covid Crisis: Luxury real-estate developers are rethinking living spaces, staircases and even ventilation systems amid the coronavirus pandemic
By Katy McLauglin
August 4, 2020 | Originally Published in The Wall Street Journal on July 29, 2020

Someday, years from now, a resident will wake up in their luxury condominium at developer Gregg Covin’s The Cedars Lodge & Spa in Hendersonville, N.C. They’ll make breakfast on the island in their big kitchen and sit on their heated balcony. They’ll walk out of their private entrance and use an elevator that serves only three other units. They’ll work out in a series of small exercise rooms and gather with friends at an outdoor restaurant in a glass atrium.

Hopefully, Covid-19 will be a distant memory. But every aspect of these homes will have been shaped by the pandemic. 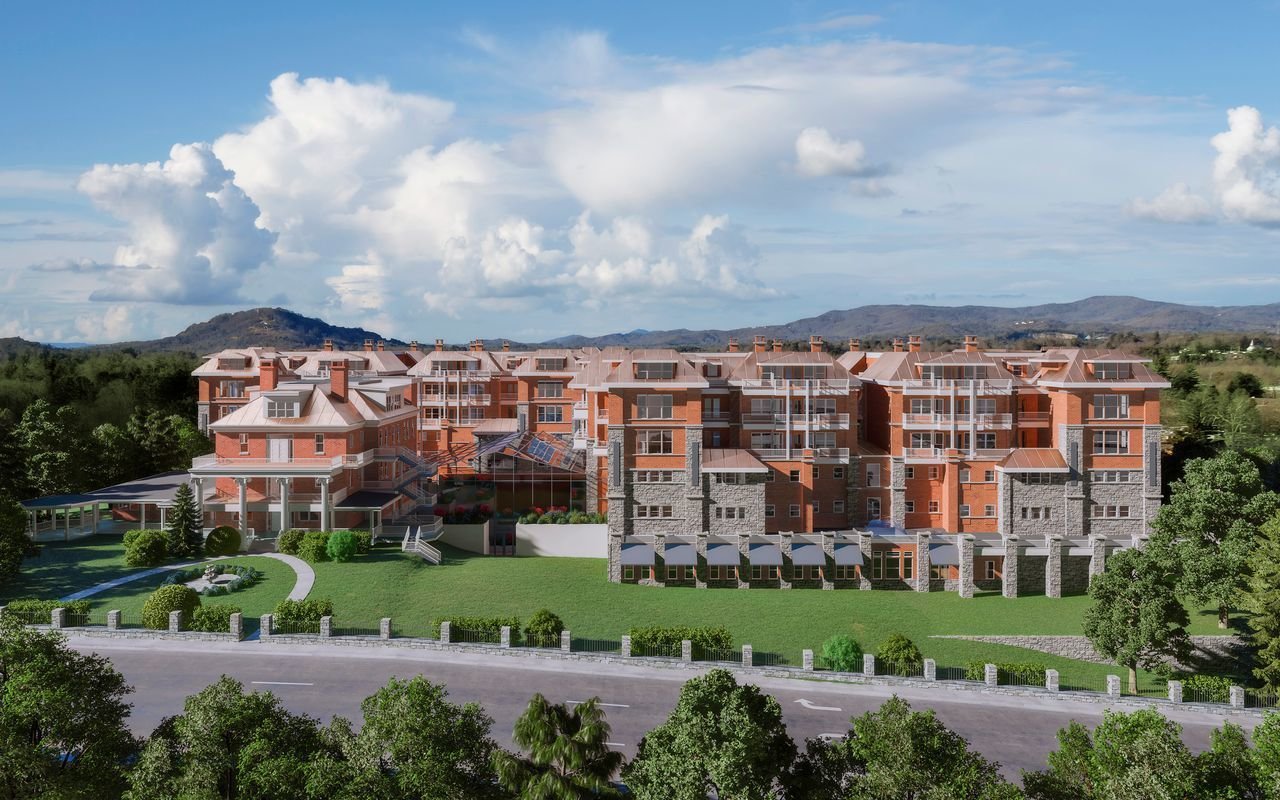 Developer Gregg Covin had to rethink his design for The Cedars Lodge & Spa in Hendersonville, N.C., to meet new demands in a pandemic-rattled world, starting with bigger kitchens and more access to outdoor space. Cedars Lodge & Spa (Rendering)

Mr. Covin tore up his original plan for a part-hotel, part-condo project with small kitchens, few balconies and large amenity spaces, and began redrawing the concept in March. "For sure, there are going to be long-term changes in behavior because of this," said Mr. Covin, who still aims to break ground this year.
One of the trickiest parts of a luxury real-estate developer’s job is divining what buyers and renters will value—and pay top dollar for—in the three, four or even five years it takes to go from design to completion. Covid-19 has made that more complex, as developers try to tease out which parts of the pandemic experience will fade away and which will remain as part of the culture.
Some costs can be passed on to the renters or buyers who want the changes enough to pay more for them. Mr. Covin, for example, was originally planning units in the $300,000 to $500,000 range, but now thinks buyers will pay $350,000 to $750,000 for larger units that can be used as second homes.

Rental developers also are betting the postcrisis market will reward them for adding or installing specialized furniture that can make a small space seem larger so they can work from home more comfortably. Other changes aimed at improving air quality or enabling distancing from other residents—such as re-engineering ventilation systems, adding elevator banks, or reconfiguring common areas—may help lower resistance to high-rise living, a lifestyle that has taken a beating in this crisis.

There is evidence already that the amenities and elements valued by the rental market have changed since the pandemic hit. Luke, a conversation-friendly real estate chatbot that texts listings to apartment hunters in New York City, analyzed 30,000 messages from potential renters between December and February and compared them with those between March and May. 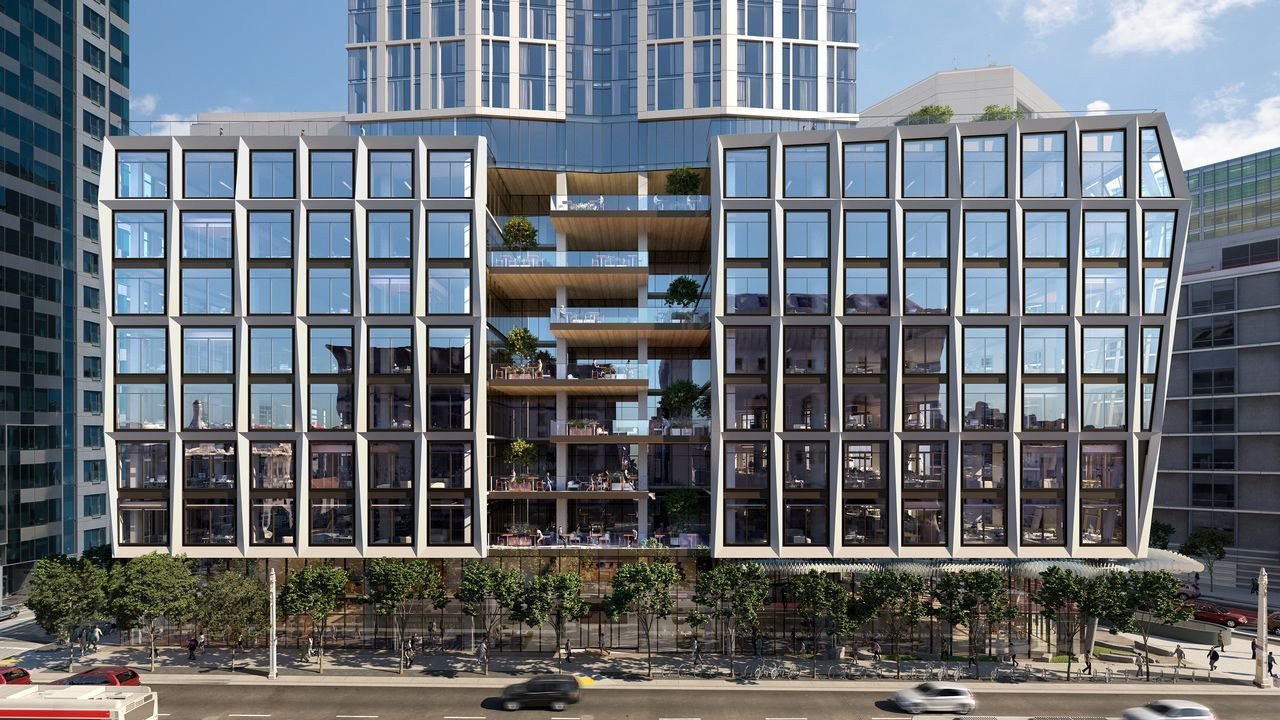 The New York-based company found that requests for home offices rose from 0.5% of messages pre-pandemic to 3% once the pandemic hit. Private outdoor space requests jumped by 20%, while in-unit laundry (a rarity in New York City) went up 17%. Interest in gyms plummeted. Requests fell by 10% for in-building gyms and by 50% for gyms nearby.

"Because of Covid, we’ve thought a lot more about stairs," he said. To encourage residents to use them, and decrease elevator density, the project will now have stairs that are wider and carpeted, with art and natural light, he said.

Until March 15, the amenity plan also featured an open 12,000-square-foot space for co-working by day and lounging by night. New blueprints, Mr. Hearing said, divide that space to include a music studio, a fitness area, art space, a cooking-and-dining area and a screening lounge. 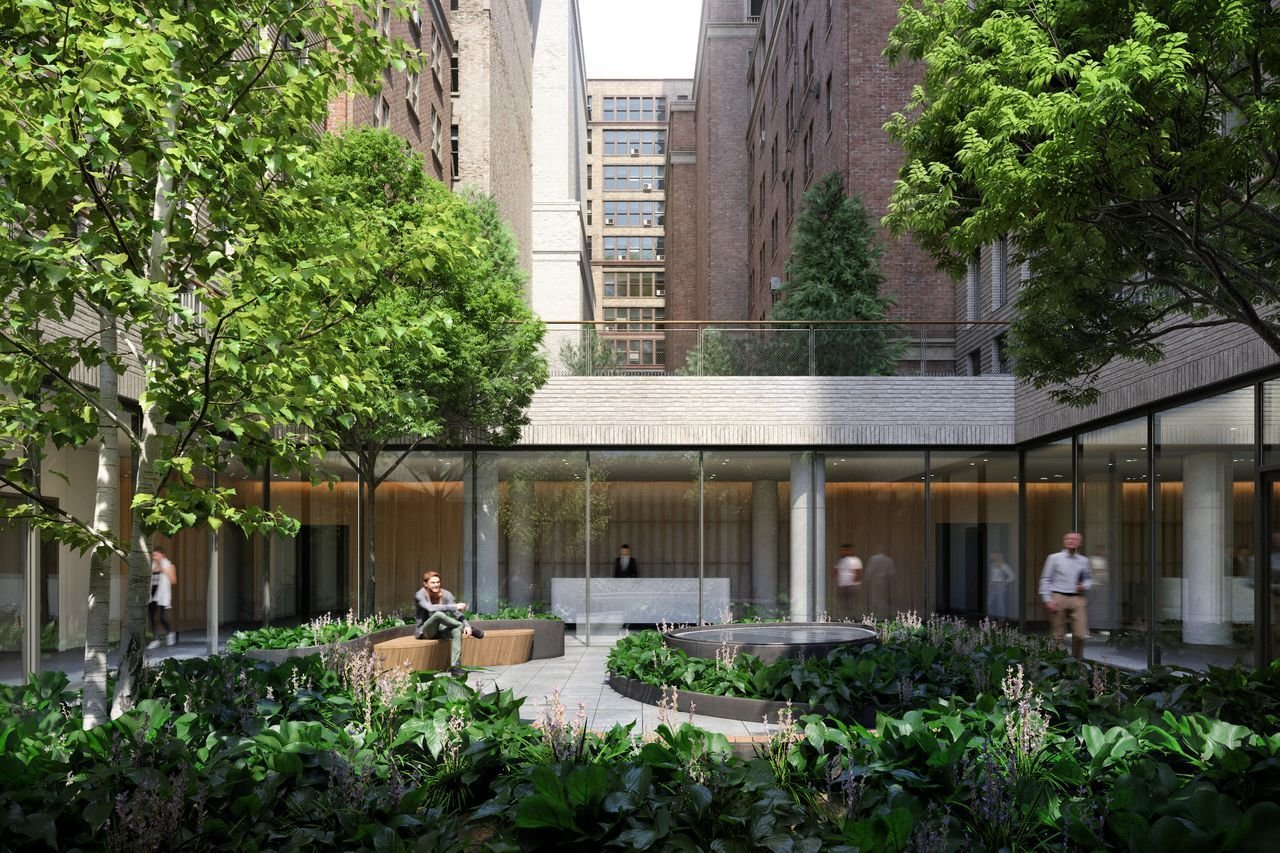 Some sections will have glass partitions, to give a sense of togetherness while creating physical separation. Many will exit to an outdoor area. The building also will include horizontal ventilation, with each residential unit having its own system, as opposed to the traditional vertical system that filters air throughout a 500-foot tower, he said.

The HVAC upgrades alone will add several million dollars to the project, Mr. Hearing said. The investment is expected to differentiate the project from older buildings and help with marketability, he added. 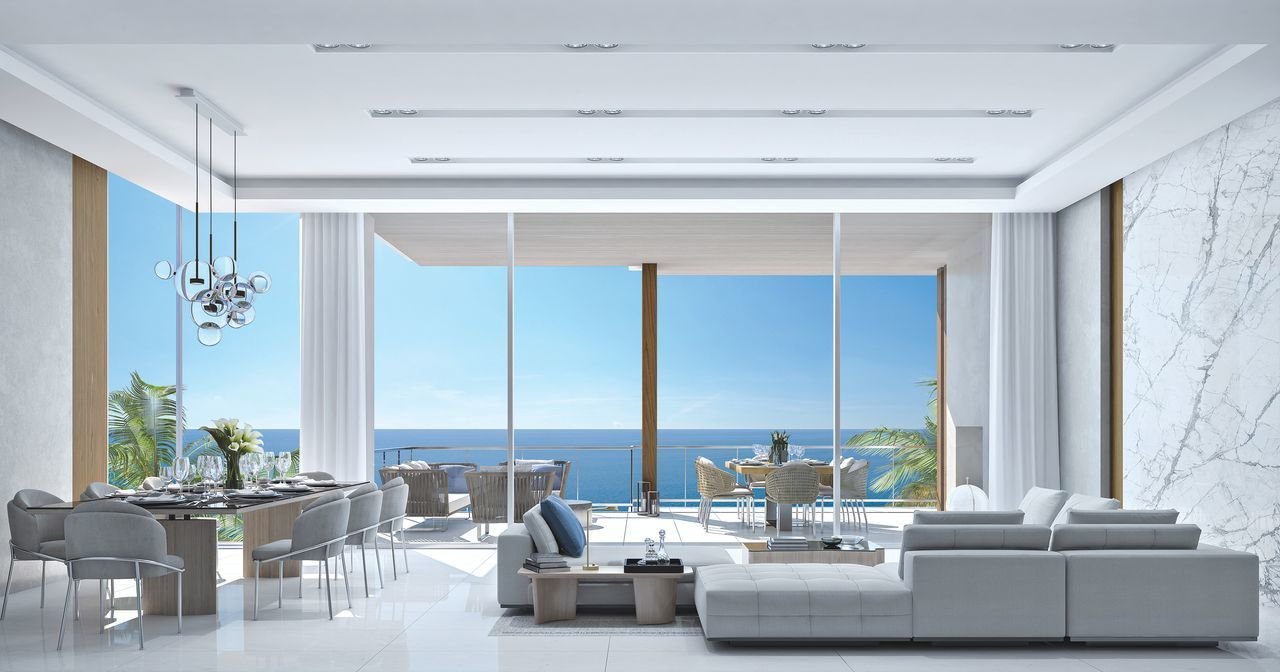 Mr. Farina intends to incorporate similar elements for his planned 14-unit project, Echelon, in the design phase in Delray Beach. The new project will have double the number of elevators initially planned, to cut down on shared space. U.S. Construction (Rendering)

She said much of the original plan should play well in the postcrisis era, citing its two towers connected by a garden, allowing for shorter and less crowded elevator rides than with a single tower, and more outdoor space. Still, the crisis has inspired her to upgrade air filters, create a separate entry for deliveries, and add touchless elements that let residents use their phones to call elevators and open doors.

At Echelon, a 14-unit project in the design phase in Delray Beach, Fla., developer John Farina had planned four elevators. In early April, he changed to eight elevators, so that no resident would have to share an elevator with more than two other units. 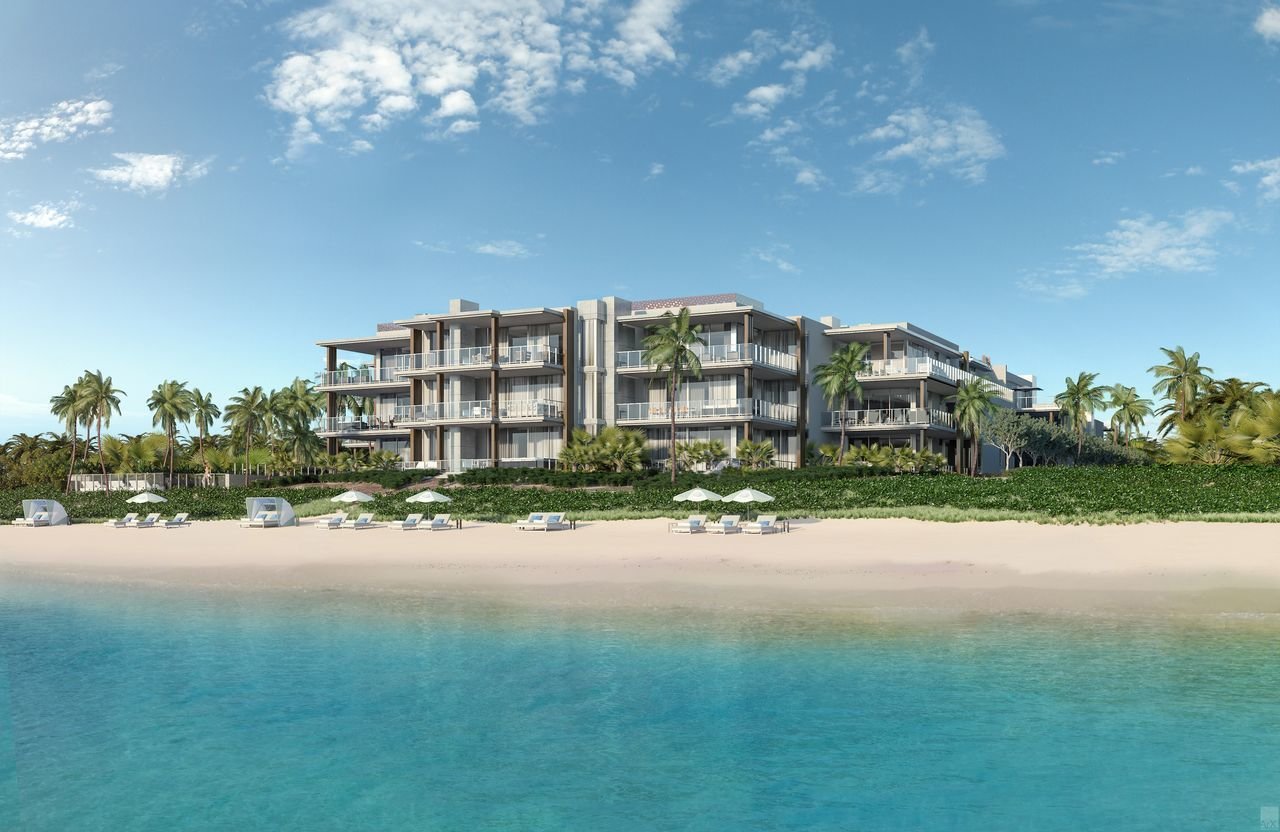 Developer Scott Brennan has reconceived a planned development, opting to build two homes in Boca Raton, Fla., on a lot he had set for double that number. He’ll use similar elements to those in this home he completed on an adjacent lot. Living Proof Photography

Mr. Farina, president and chief executive of U.S. Construction, said he made the change in light of how successful another Delray Beach project, called Ocean Delray, has been.

Ocean Delray has 19 units, each with a private, air-conditioned garage, and four with private elevators. The project, with units from $5 million to $9 million, is half sold, Mr. Farina said.
The pandemic has made some developers re-evaluate the economics underpinning their projects. Mr. Covin said that after a long career developing luxury projects in downtown Miami, he is switching to North Carolina because he believes there will be heavy demand for second homes in the midpoint of the East Coast—and less interest in dense city living.

Scott Brennan sees a strong market for luxury single-family homes in Florida. He developed an 8,000-square-foot house now on the market for $14.5 million in Boca Raton. He had an additional piece of land on which he planned four townhouses with a common pool and green space. Now, because the pandemic has reduced interest in shared amenities, he plans to build just two homes with private yards, as well as space for home gyms and home offices.

"The original house suits the Covid discussion perfectly," said Mr. Brennan, who happened to have opted for expanses of retractable glass doors that give the home plenty of flexible indoor-outdoor space. The new homes will be similarly designed, he said. 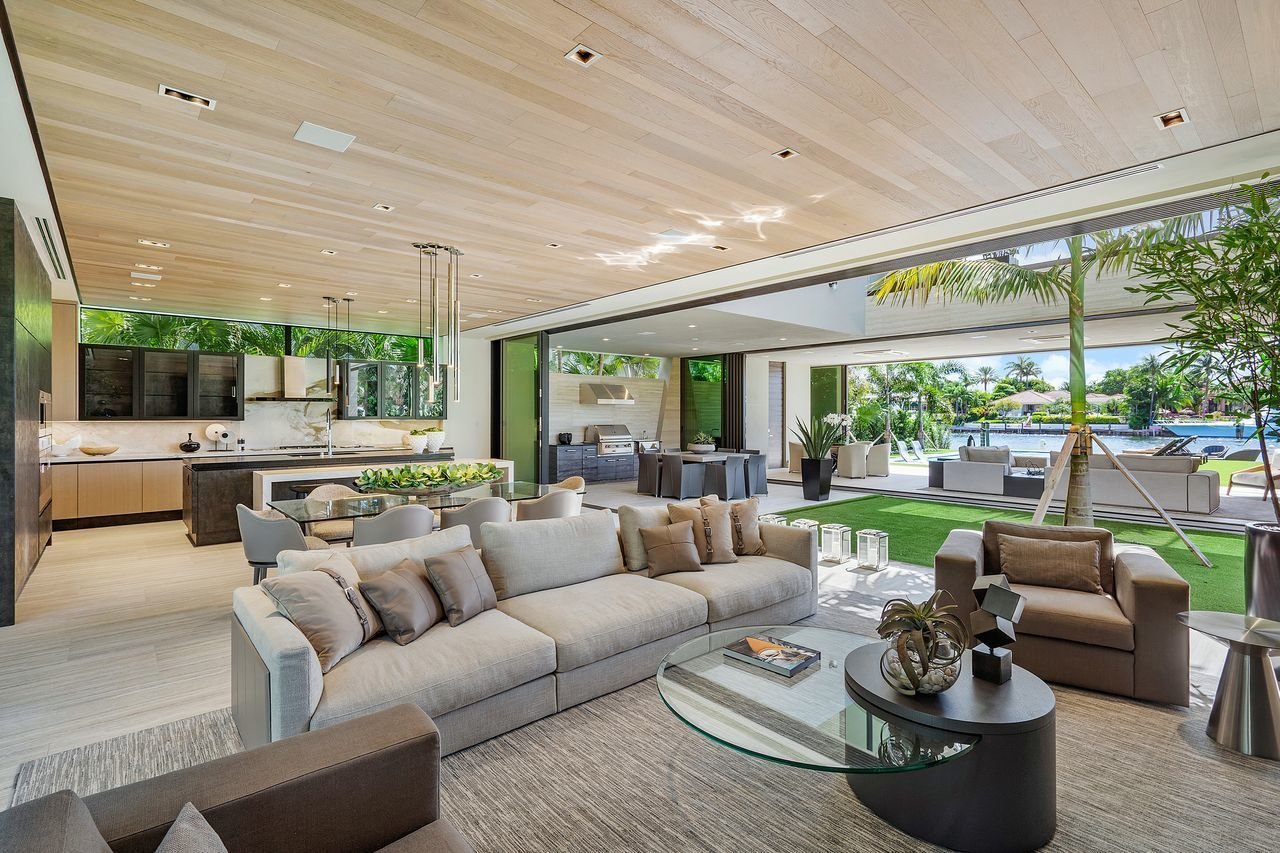 Construction was under way at 1900 Broadway in Oakland, Calif., when developer Colin Behring planned alterations: more units with furniture from Ori, of Boston, that lets residents push a button to switch from sleeping space to working space. Behring Co. and Ori, Inc. (Rendering)

Colin Behring, chief executive of Behring Co., based in San Ramon, Calif., already has 1900 Broadway in Oakland under construction, but he has planned alterations.

He said working from home will be increasingly important, but it isn’t financially viable to make the apartments larger. Instead, more units—25% rather than 5%—will have furniture by a Boston-based startup called Ori. Designs include beds that drop from the ceiling to the floor at the push of a button, or that retract into a home-office module. The 39-story building is set to be completed late 2022.

Among the most common design changes made by developers is adding outdoor space or increasing access to those spaces. In a rental project in Quincy, Mass., now in the permit phase, developer LBC Boston is adding balconies to about a quarter of the units, said Margarita Kvacheva, senior vice president. "We are strategically placing the balconies on the south side, because those get the daylight and that’s where people can go out and get vitamin D," she said.

At Natiivo Miami, a 51-story multiuse building in the Florida city slated to break ground this year and to be completed by late 2022, developer Keith Menin is planning retractable glass walls. Though expensive, he said they would be valuable in linking common areas—such as a gym and a walkway to the pool—to outdoor spaces.

"This could be the new norm," Mr. Menin said.

Touchless systems, already a luxury amenity, are becoming necessities, developers said. Ric Campo, chairman and chief executive of Camden Property Trust, began rolling out Chirp, a virtual leasing platform, in the company’s 164 rental buildings last year.
The system lets prospective renters set up an appointment, be guided by a map from a parking space to the unit, gain entry via a code, tour the unit alone, and sign the lease online. Residents can use fobs or their phones instead of keys, Mr. Campo said.

Home is Where the Stethoscope Is 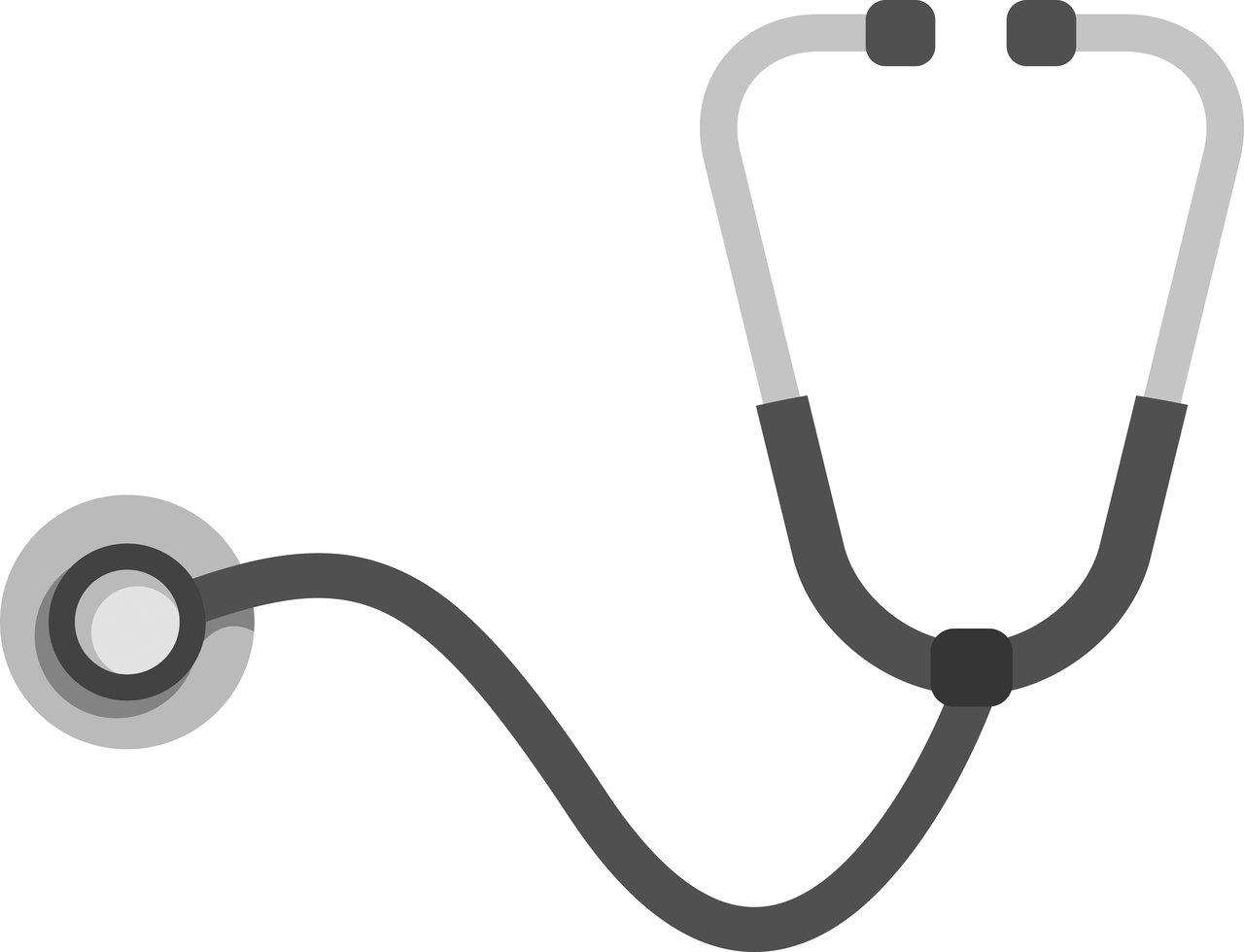 Buy a House, Get a Year of Telemedicine

Miami-based developer CC Homes, which builds about 500 single-family homes a year, will provide buyers at its Canarias in Downtown Doral development with a year subscription to Baptist Health Care on Demand, said chief executive Jim Carr, who is also chairman of the board at Baptist Health South Florida. Buyers of the $500,000 to $2 million houses will receive a home-exam kit with stethoscope, tongue depressor, otoscope for ear exams and a thermometer that feeds information to telemedicine providers at Baptist. The year’s subscription costs about $1,000 per family, Mr. Carr said.
Someone Hot Just Entered the Building

2000 Ocean, a 64-unit condo building in Hallandale Beach, Fla., will have infrared cameras in the lobby to detect when someone walks in with an elevated temperature, said developer Shahab Karmely, of KAR Properties. Buyers of units, opening in May, 2021 at $2.7 million to $12 million, will also receive an iPad and home medical kit. The developer said he won’t dictate how the fever information will be used, nor will he link the iPad to a telemedicine service. "We are supplying the technology," he said. "How it will be used is up to the homeowners themselves."

Developer Daniel Kodsi is negotiating with a medical center to occupy the 100,000 medical building abutting his 55-story Legacy Hotel & Residences in Miami World Center. The project, due in 2023, was originally meant to capitalize on the booming medical-tourism industry. Now that coronavirus is upon us, Mr. Kodsi believes it will viewed as a benefit to buyers of the $300,000 to $2 million condos. "Imagine a shelter-in-place situation, and having doctors, nurses and a pharmacy right downtowns," Mr. Kodsi said. "Health is the new wealth," reads the website for the project.